Burlington is a sad town.     Not much to write about here.    Except John had the best chicken tenders (“OF HIS LIFE?!) at the riverside joint steps from the Marina.      We pulled into the harbor (4 feet)  had to pump our own gas and find a slip (2 attempts) with adequate power.      The marina people were nice and a few had indicated a trip to Red Wing was in their future!      In the morning after our arrival,  I headed out on bike to find the local Hy-Vee.      Got lost in the early morning light and was chased by a Grand Prix with some local “Biffs”  which was unnerving as I didn’t have my phone or any other protection with me.      After a close drive by,    I got off the main road and meandered the side streets back to the boat just in time to miss the morning rain storm!       Didn’t mind pulling out of this place.   Pronto.

Muscatine 2-     On our way down,  we passed Muscatine,  and thought it might be a nice stop in the city harbor going back up.      So on our way upriver today, we crept into the public dock (4 ft)  and found a really nice inner harbor with 8 transient slips (first come, first served).   We picked the best one, and backed in to find “FREE”  power and water hookups.    It would seem that the town is looking for any way of getting more business into their community.     Like many river towns we’ve seen,  the small town recovery is a growing,  but slow trend.    There are many building on ol main street that are looking for a rebirth,  yet a few movers and shakers are looking to draw more biz on the edge of the ol’ downtown and building a new high end hotel.    For those who have seen Detroit's downtown entertainment district near the COBO center,  very similar.      I found the pubic library hoping to use the free Wi-Fi while John and Sue Nelson hoofed it to the local laundry mat.     It was a time warp back to the 70’s with not much of the machinery working and needing a “Fonzie” style whap.    At one point, Sue got so frustrated she carefully hopped on one of the machines and “kick” started the washing machine back to life!        The locals took an interest in my boat bike which stirred up discussions as to where the nitelife would take us.    We ended up at a really eclectic,  “Weberesque”  town institution called the Flaming Embers  bar where I got my butt kicked by Sue (I sense this girl has a kicking problem)  in “Giant Checkers.”    Walking back to the dock we passed the city water fountain where there were families staying cool and making memories while frolicking in many fountain sprayers.    Ending the night on the dock under a full moon and against the backdrop of the community designed and funded lit bridge.    It was a very pleasant stay.        Early next morning I took a moment to do some ”Dock Yoga.”     It was a moment of Zen with the waves lightly lapping against the rocks near my perch.    Sue whipped up some eggs (we still have a bunch).  , complimented by Michele's Banana bread.   After food, we split up again to shop and Wi-Fi!   We found a great little coffee shop run by Elli.    She is a gem of a lady who has such a infectious “can do”  attitude!    See adds local color to the mix mostly midwestern community and hosts a weekly knitting club in her building on the 2nd floor.     Just outside her space in the common area we found a “HUGE” Mark Twain thingy and I noticed a “closed” coffin piano which I opened to find in pretty good shape.   I decided (go figure)  to play for the locals.     After  20 minutes of music we left the gathered group of shop owners and patrons to applause and smiles.

It was a great start to the days next adventures 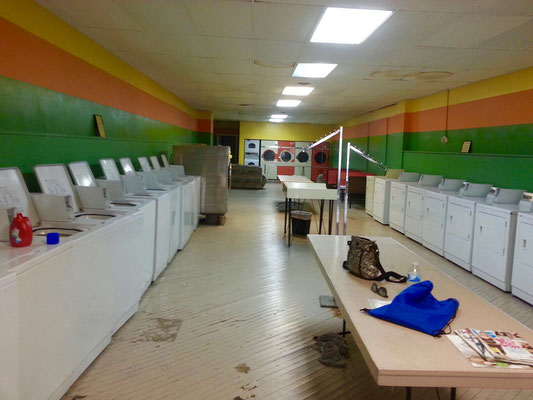 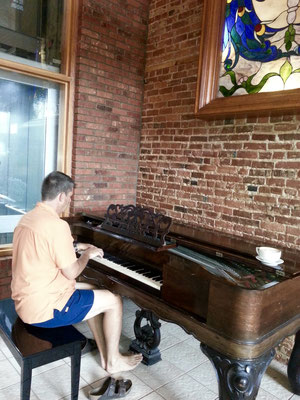 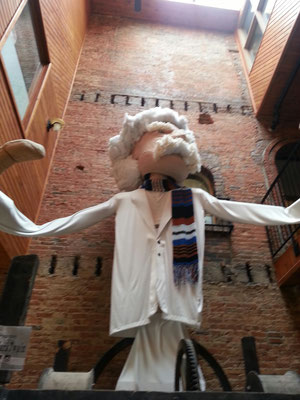